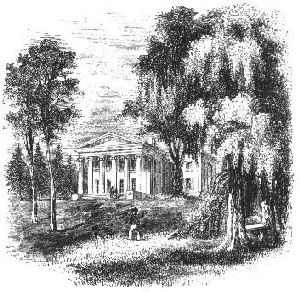 Colonel James Alexander Hamilton, the third son of Alexander Hamilton, and his wife, Elizabeth Schuyler, bought the 154 acre property along the banks of the Hudson River in 1834 and named it Nevis after the Leeward Island in the British West Indies where his father was born in 1757. A Greek Revival mansion, was constructed a year later, in 1835, as their residence. In 1878, upon the death of James Hamilton at age ninety-one, "Nevis" passed into the ownership of his son, Colonel Alexander Hamilton (d. 1889), who clad the house in brick in 1884, and then to his cousin (James' nephew), Philip Schuyler (d.1906). Philip's widow, Harriet, died in 1915, and the property was sold to Charles E. Danforth in 1917. He held the property for a year and then sold it to the International Garden Club in May 1918. Over the years, the original 154-acre estate was partitioned among new owners and reduced in size to 68 acres. The T. Coleman DuPonts of Delware, bought the estate in 1920. The DuPonts kept the property for fifteen years. In 1934, Mrs. T. Coleman DuPont gave the remaing 68 acres of the Nevis Estate, to Columbia University originally as land for an arboretum "to make more satisfactory provision for its increasingly important work in landscape architecture and general horticulture." An early pamphlet remarks, "Nevis is one of the superb examples of historic and landscape architecture in America. No other country place north of Maryland so perfectly exemplifies the taste of the Early Republican Period in our history." The property contains an inventory of 2,640 trees and 1,928 ornamental shrubs. Columbia University began construction of a physic laboratory on the site in 1947. In early 1950, Dwight D. Eisenhower, president of the University, inaugurated what was, at the time, the world's most powerful cyclotron (The cyclotron was decomissioned in 1978 and is no longer in operation). Today, the laboratories at Nevis constitute the University's primary experimental center for the study of high-energy particle and nuclear physics, as well as astrophysics. The historic Hamilton mansion is still located on the 68 acre Columbia University Nevis campus. The Old Croton Aqueduct Trailway passes through the Nevis property and the historic mansion is directly adjacent to the Trailway.