Brief History Of The Aqueduct
The Croton Aqueduct is a masonry tunnel that brought New York City its first supply of clean, plentiful water, and thus contributed to its development as a great metropolis. The Aqueduct was built in response to the fires and epidemics that repeatedly devastated New York City in the late 1700s and early 1800s, owing in part to its inadequate water supply and contaminated wells.

Two major catastrophes, a cholera epidemic in 1832 and a great fire in 1835, in which hundreds of lives were lost and over 600 buildings destroyed, prompted the City of New York to accelerate acquisition of a suitable water supply to meet the needs of the people.

Colonel DeWitt Clinton appears to have been the first to recommend the Croton River; other suggestions called for the damming of the Hudson River or using the Saw Mill River. A Board of Water Commissioners determined the best course of action to be the construction of a closed masonry conduit that would extend over 40 miles from the Croton River to New York City. Despite protests from hundreds of Croton farmers, land was purchased and John B. Jervis of Rome, New York was named the chief engineer of the project in October 1836.

Construction began in 1837. A work force of over 5,000 Irish immigrant laborers was organized to remove tons of solid rock and gravel with picks & shovels. Since dynamite had not yet been invented, highly volatile gunpowder was used for blasting.

In spite of many difficulties, including strikes and riots among workers, who were paid 75 cents to a dollar a day for their labor, work progressed speedily. The worst disaster occurred on January 8, 1841, when a flood caused by torrential rains and a rapid rise in temperature after a heavy snowfall caused the dam to give way. Many houses, barns and stables were washed away, and several people died as a result.

Repairs were made, damages settled and the first trickle of Croton water entered the Aqueduct on June 22, 1842. A 38-gun salute marked the occasion. The third longest aqueduct in the history of the world was functioning at a final cost of $12 million.

The Aqueduct carried water 41 miles from the Old Croton Dam in Westchester County, north of New York City, to two reservoirs in Manhattan - on the present sites of the Great Lawn in Central Park and the New York Public Library on Fifth Avenue from where it was distributed.

Now a National Historic Landmark, the Aqueduct is considered one of the great engineering achievements of the 19th century. The tunnel is an elliptical tube 8.5 feet high by 7.5 feet wide. It is brick-lined and represents an early use of hydraulic cement for most of its length. The outer walls are of hammered stone.

Designed on principles dating from Roman times, the tunnel is gravity fed for its entire length, dropping gently 13 inches per mile. To maintain this steady gradient through a varied terrain, its builders had to cut the conduit into hillsides, set it level on the ground, tunnel through rock, and carry it over valleys and streams on massive stone and earth embankments and across arched bridges. Typically, it is partly buried, with a telltale mound encasing it.

Today, remnants of the aqueduct still exist. Although much of the original masonry has been either removed or covered up by growth, a frequently-used un-paved walking and bicycling path runs along the easement of the former aqueduct. The Old Croton Aqueduct State Historic Park extends 26.2 miles in Westchester, through the city of Yonkers, the villages of Hastings-On-Hudson, Dobbs Ferry, Irvington, Tarrytown and Ossining on up to Croton.

A Brief Overview of The Construction Of The Old Croton Aqueduct 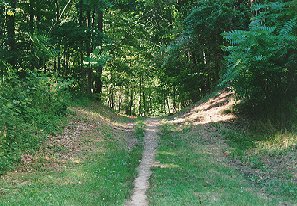 For more than 150 years, the trail atop the Old Croton Aqueduct or the OCA (as the hikers like to call it) has linked communities and a wealth of historic sites along the lower Hudson River. Locals will often say, "Let's go for a walk along the Aqueduct," referring to the footpath atop the masonry water tunnel. Both the trail and the tunnel (also known as the "tube") comprise the Old Croton Trailway State Historic Park.

To view trail maps of each of the two sections of the OCA click the links below:

For more information about the Old Croton Aqueduct:

The park was created in 1968 and encompasses the northernmost 26 miles of the Aqueduct and its right-of-way, from Croton Gorge County Park to the Yonkers-New York City line. It lies wholly within Westchester County. It is under the jurisdiction of the Taconic Region of the New York State Office of Parks, Recreation and Historic Preservation.

The appeal of the trail lies in the great diversity of scenes it traverses. Thus, a walk on the Aqueduct can take you not only through stretches of leafy green space but also past backyards and local parks, "Main Street" village centers, great and small historic sites, trickling rivulets and grand Hudson views. It is open to pedestrians, joggers, cyclists, cross-country skiers and equestrians. Photographers, bird watchers, naturalists and historians enjoy it as well. Cyclists are requested to avoid the trail after heavy rains and during the 'mud season.'

A recent reorganization and the introduction of a new park site manager modified the management structure. The park is managed by two people. The Historic Site Manager role was recently assumed by Michael Boyle who succeeds Brian Goodman. The Park is administratively affiliated with Rockefeller State Park Preserve, headed by Alix Schnee. In the past the Old Croton Aqueduct State Historic Park was affiliated with Franklin D. Roosevelt State Park. Besides managing the state's longest and thinnest park (average width is 60 feet), one that passes through a dozen or so municipalities, park management and the Friends will give slide talks about the Aqueduct and trail to interested groups and is available to the general public to answer questions.

An elaborate full color map created by The Friends of The Old Croton Aqueduct
detailing the construction and history of The Aqueduct and many of the neighboring historic landmarks
is available for sale at the Overseer's House or
available online. Click Here To Order