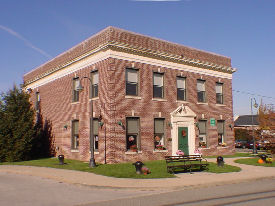 Irvington residents, whether young or old, have never lacked motivation in finding recreational activities. However, the facilities and funding that would enable residents to pursue these activities as Village-sponsored programs were not really in place until the early 1960s. A privately funded Irvington Youth Center, Inc., fell under the direction of a full-time recreation supervisor who also held a salaried position as Irvington's superintendent of parks. The Youth Center was allowed use of Village parks but did not own any facilities. Seeking to remedy this situation, Richard C. Wells, president of the Youth Center board of directors, and Irvington mayor, George F. Gillen, sought to raise funds for the purchase of the recently vacated St. Paul's Methodist Church property (at the comer of Main and North Eckar streets). When renovated, the building would be renamed the Isabel K. Benjamin Community Center, in honor of Ms. Benjamin, "a first lady of Irvington," who led the village Girl Scouts in exemplary fashion for years. From the outset, Mr. Wells and Edward McDermott, director of the Youth Center's spring program, saw the new facility as providing recreation "for all age groups." Mayor Gillen, too, recognized that, in addition to youth recreation, "there are many additional ways in which the building can serve the Village of Irvington," noting several adult groups interested in the center as a meeting place.

The final phase of the fund-raising effort got underway on April 15, 1961. Ted Mack, well-known host of The Original Amateur Hour, which aired on radio and TV, was an Irvington resident, living at the time on Meadowbrook Road. He offered to conduct an amateur contest at the elementary school, the proceeds of which would be added to the fund established for purchase and renovation of the Methodist Church. The Village would assume responsibility for the community recreation program, formerly conducted by the Youth Center, on June 1, 1961.

Accordingly, under the heading "Senior Citizens Meeting in Irvington," the October 28, 1965, issue of the Irvington Gazette notifies residents that the Recreation Department of Irvington invites those 60 [now 55] years of age and older, to attend a meeting at the Isabel K. Benjamin Community Center on November 4th. This "Organization Meeting" was called to establish, "for the first time in the history of the department, a program of activities for the senior members of the Village." Following introductory remarks by then Mayor Peter A. Peyser, Ronald W. Chase, Superintendent of the Recreation Department, chaired the meeting and Wolfert Lockwood, Village Historian, gave a one-hour slide presentation on the historical development of Irvington.

Thus was created not only a meeting place, but what has become a recreation hall, learning/information center, community support group, charitable activities source, and home-away-from-home for so many of those who, over the years, have shared in making Irvington the community that it is. The group was to meet Tuesday afternoons. At a Christmas party held in the early 1970s, Deputy Mayor Adele Warnock, a club member, scanned the faces of the 90 attendees for those who had lived in the village for 40 to 70 years previously. She listed names such as Mondelli, Reale, Gilchrist, Tewey, Burke, Herlihy, and McHugh.

Not a group to sit back and let others take care of matters, the seniors pitched in during the 1976 Bicentennial celebrations by producing wooden Continental soldiers that lined the village streets for most of the year. These were later sold at auction to help raise funds for a mini-bus.

With additional money coming from bake sales, a food booth at the annual Fireman's Bazaar, private donations, and a mail campaign, more than $12,000 was raised for the purchase of the mini-bus in 1977. The bus would convey seniors on shopping trips, visits to doctors, and recreation excursions. The Village would provide insurance, maintenance, and garaging for the vehicle. ''We hope to keep the mini-bus on the road for at least 35 hours a week," said Roy Flowers, Superintendent of the Recreation Department.

By the mid-1980s, the seniors could look back on a wonderful succession of excursions to a variety of destinations. There was a boat ride on the Hudson River aboard the Alexander Hamilton, and trips to Ward Pound Ridge Reservation, Lake Mohonk, and Albany, where they visited state legislators for a tour and a chance to voice their concerns. Special events were held locally at Matthiessen Park, with some hosted by Irvington's religious institutions. Lorraine DePaoli, who had organized these outings for some ten years previous, offered the following observation in the Enteprise (September 13, 1984): "Members are expanding their friendships at a time when most seniors' family members and friendships are decreasing." Two such members were Stanley Zubas, then 67, and Helen Beswick, then 64. After returning from a March, 1984, senior outing to Lake Waramaug in Connecticut where they had enjoyed lunch with Helen's close friends, the Wamocks, they reconnected in Irvington for daily walks together along the Croton Aqueduct. As reported later in the Enterprise, the daily walks "led straight to Judge Chessan's North Tarrytown offices, where the couple was married, with Adele and Bill Warnock as witnesses." The marriage took place on July 26th and when the seniors held their annual picnic at Matthiessen Park in August, 80 members joined in the celebration for the newlyweds.

The last decade of the twentieth century saw continued growth of the Senior Center alongside steady expansion in the overall programs of the Recreation Center, which was becoming somewhat overcrowded. Fortunately, this situation was alleviated during Mayor Dennis P. Flood's administration, when a building designated for use as the Senior Center was included in the plan for development of what has since become Scenic Hudson Park. The property at 29 Bridge Street had been previously occupied by a succession of lumber companies and the 4800 square-foot building to be occupied by the seniors was formerly the offices of the Advanced Transit Bus Company. A $200,000 Community Development Block Grant funded 50 percent of the renovation. In the Journal News, Feb. 28, 1999, Irvington Recreation Director Joe Archino comments that "the new center will expand the village's offerings to seniors even more." In the same article, then Village Clerk/Treasurer Lawrence Schopfer remarks, "Most importantly, it's a space of its own where seniors will have a building to themselves."

And what a space! Following open houses at the center on March 3, 4, and 10th, 2001, some 200 seniors were given access to a beautiful building, adjoining a beautiful park, on the shore of a beautiful river.

As the Journal News reported in 2004, three years after the opening, the center "offers a warm and welcoming interior to its guests, as well as commanding views of the Hudson River. It has become a favored destination for the village's elderly, who can find lectures, exercise, and travel opportunities." In the same article, Donald Seus comments, "I enjoy just coming down, seeing people, being among friends .... There's nothing not to like about it. It's an excellent facility." Pictured in the same article are seniors Helen Uszak and Barbara Kraus, assisting with the Midnight Run, a program that distributes food to the homeless.

Since assuming the position of Director of the Senior Center in June of 1987, Joan Armstrong has successfully continued its programs during the period of transition from Main Street to Bridge Street. Through cooperative endeavors she has also expanded senior benefits and center outreach. In 2002, at the request of Community Police Officer Peter Carelli, the Police Benevolent Association of Irvington purchased circular floor fans for distribution to seniors in need of summer heat relief. Carelli also helped the village join a metro-area program that collects cell phones, reprograms them with 911 access, and distributes them free-of-charge to seniors in need. With regard to Armstrong and Carelli's efforts, Recreation Superintendent Joe Archino commented that "they make life better for seniors." In 2004, the center joined forces with AT&T Telecom Pioneers, when 20 center members made Hug-a-Bears for distribution to children who had been through traumatic situations, such as car accidents and medical emergencies. Through an all-volunteer service known as FISH (Friends In Service Here), the center also provides escorts to medical appointments. In setting up for events and other daily matters, Joan receives great assistance from Herbert Mueller, Recreation Assistant, while Hank Samoyedny, mini-bus driver, assures the safe conveyance of seniors to and from programs.

1961, one of the contestants was a young girl named Irene (Ivy) DeLuca. Little did she realize that fifty years later her parents, Ray and Irene DeLuca, would be enjoying the weekly programs of the center for which the contest sought to raise funds. For almost half a century, the Irvington Senior Center has been a source of support for the village's seniors, while drawing upon the wisdom, experience, and altruism of that population to benefit the community at large.

The author would like to acknowledge the staff of the Irvington Public Library, especially Betsy Sadewhite, Local History Librarian, for providing access to the materials that made this article possible.